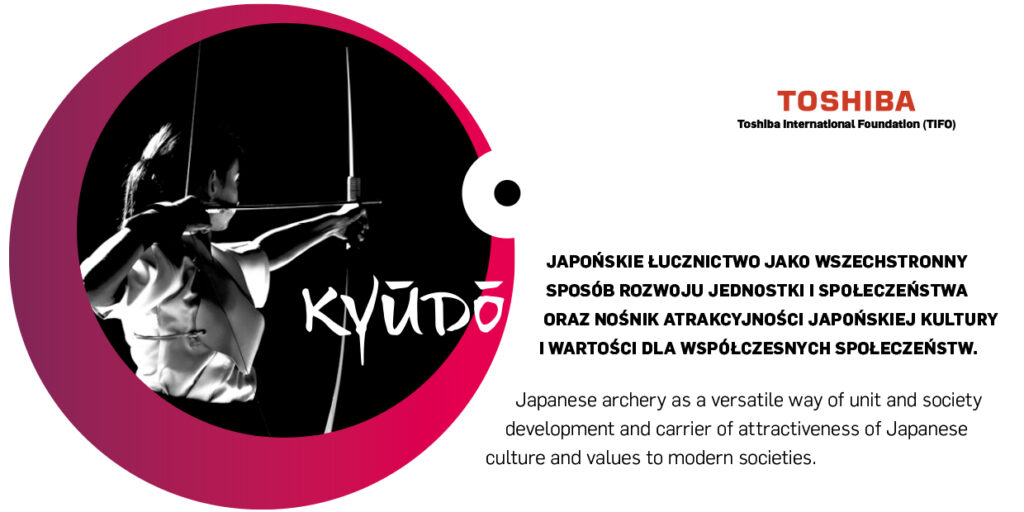 The project was awarded a grant by International Toshiba Foundation in the field of culture and art. Implemented by Polish Kyudo Association from July 2021 to February 2023.

The project aims to increase awareness of the impact of Japanese culture on Polish and European culture by increasing the competences of Kyudo leaders and presenting universal ideas carried by Kyudo to help develop a valuable individual and a society. It is also intended to contribute to the overall creation of an attractive image of Japan on the international arena. The project involves a three-week stay of four Polish Kyudo instructors in selected dojos in Japan to gain Kyudo knowledge and gather interviews showing individual stories of Kyudo practitioners. After returning to the country, the publication containing selected reviews will be made in Polish and English. Two seminars will be organised for other Kyudo practitioners, in order to transfer the acquired knowledge and discuss the direction of development of Kyudo clubs in Poland. The project involves a series of meetings in institutions related to the broadly understood Japanese culture. The meetings are aimed at increasing public interest in the culture and art of Japan, encouraging the practice of Kyudo and budo in general and creating an attractive image of Japan in the eyes of Poles.

Project objectives:
• Increasing the credibility of Polish instructors by learning from Japanese teachers and the awareness of the influence of Kyudo on the development of individuals and the society.
• Increasing interests in Japan in the eyes of Poles by presenting the attractiveness and potential of its culture.
• Increasing number of people practicing Kyudo.
• Collecting source knowledge and improving the quality of Kyudo education.
• Publishing interviews to help people to get to know the culture and mentality of the Japanese and to show Japanese culture and values in Europe as attractive and worth following.
• Enabling exchange of ideas, knowledge, and experiences between Japan and European countries.
Project is co-funded by Toshiba International Foundation (TIFO).

TIFO (Toshiba International Foundation) strives to contribute to ehanced international understanding of Japan by promoting cultural exchanges, including the organization and sponsorship of symposia and seminars. It’s goal is to establish relations of trust with reaserchers into Japan and institutions around the world, contribute to the cultivation of future generations awed and fascinated by Japan and contribute to enhancing Japan’s global presence.